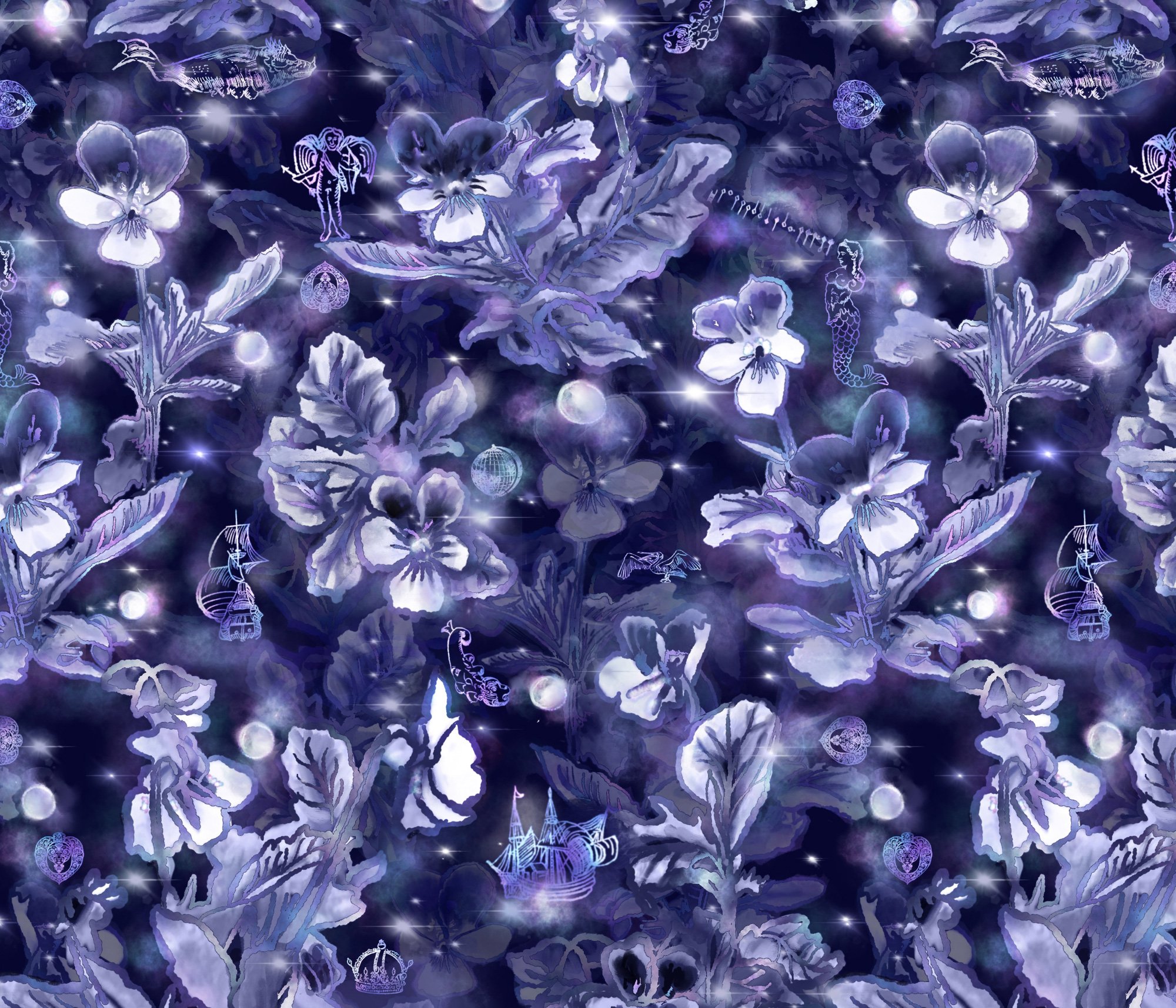 Introducing “Love-in-Idleness Mermaid’s Song,” based on Oberon’s directive to Puck in A Midsummer Night’s Dream to fetch the wild pansy for his love potion, this pattern is in Very Peri and opalescent tones.

Look for Cupid and the mermaid singing (the notes are from Monteverdi’s Ecco mormorar l’onde -Here Murmer the Waves- of 1590), the ships, and stylized Elizabethan-era imaginings of porpoises and a whale. There are also a number of items associated with Queen Elizabeth herself, who is thought to be the “imperial votaress” referred to in the speech: pearls (the moon?), a crown, a pelican, and a globe showing the New World. A Midsummer Night’s Dream dates from around 1595-6.

The excerpt from the second act of Shakespeare’s play reads:
OBERON
Well, go thy way: thou shalt not from this grove
Till I torment thee for this injury.
My gentle Puck, come hither. Thou rememberest
Since once I sat upon a promontory,
And heard a mermaid on a dolphin’s back
Uttering such dulcet and harmonious breath
That the rude sea grew civil at her song
And certain stars shot madly from their spheres,
To hear the sea-maid’s music.
PUCK
I remember.
OBERON
That very time I saw, but thou couldst not,
Flying between the cold moon and the earth,
Cupid all arm’d: a certain aim he took
At a fair vestal throned by the west,
And loosed his love-shaft smartly from his bow,
As it should pierce a hundred thousand hearts;
But I might see young Cupid’s fiery shaft
Quench’d in the chaste beams of the watery moon,
And the imperial votaress passed on,
In maiden meditation, fancy-free.
Yet mark’d I where the bolt of Cupid fell:
It fell upon a little western flower,
Before milk-white, now purple with love’s wound,
And maidens call it love-in-idleness.
Fetch me that flower; the herb I shew’d thee once:
The juice of it on sleeping eye-lids laid
Will make or man or woman madly dote
Upon the next live creature that it sees.
Fetch me this herb; and be thou here again
Ere the leviathan can swim a league.
PUCK
I’ll put a girdle round about the earth
In forty minutes.
Exit

OBERON
Having once this juice,
I’ll watch Titania when she is asleep,
And drop the liquor of it in her eyes.
The next thing then she waking looks upon,
Be it on lion, bear, or wolf, or bull,
On meddling monkey, or on busy ape,
She shall pursue it with the soul of love:
And ere I take this charm from off her sight,
As I can take it with another herb,
I’ll make her render up her page to me.

See it at Society6