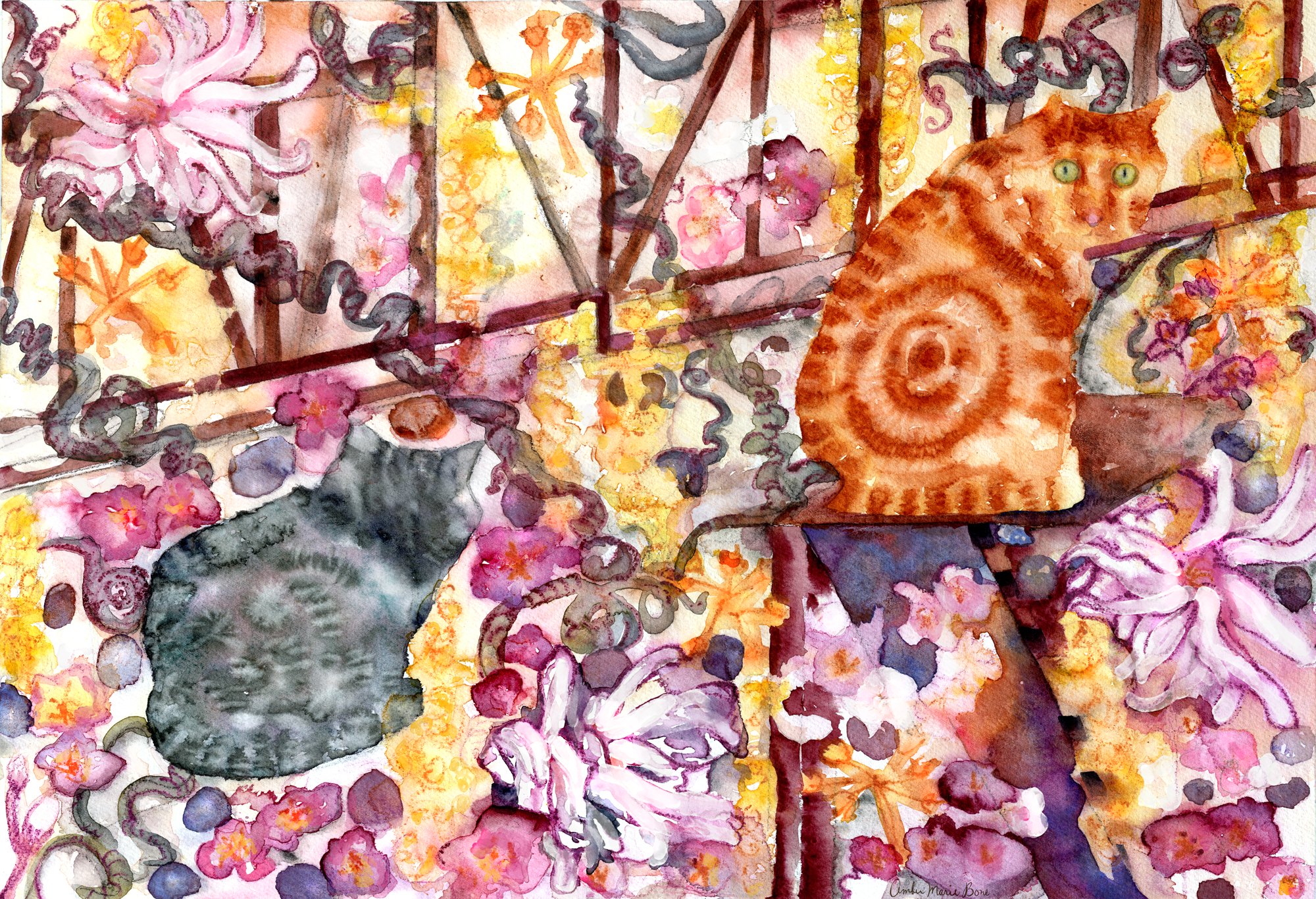 Hazel Catkins is a loose impression of the spring bursting forth all around in the garden here: hazel, magnolia, primroses dotting the grass. Zürich is full of these cat ladders which lead to the upper-story-windows of houses. Our neighbor cats appear there like clockwork every evening to bask in the sun and survey the surroundings. (Not today – the snow is back!)
This painting was created using the March Colori Combo Challenge 8 colors of Pumpkin, Merlot, and Slate Grey. I thought it would be fun to play with some mixes for the colors so used Rose of Ultramarine from Daniel Smith and mixed up a version of their gorgeous Aussie Red Gold (which I don’t have.) The grays mostly combine the Ultramarine from the purple with the PR101 from the Red Gold, but I dabbled in a few actual gray pigments too here and there. 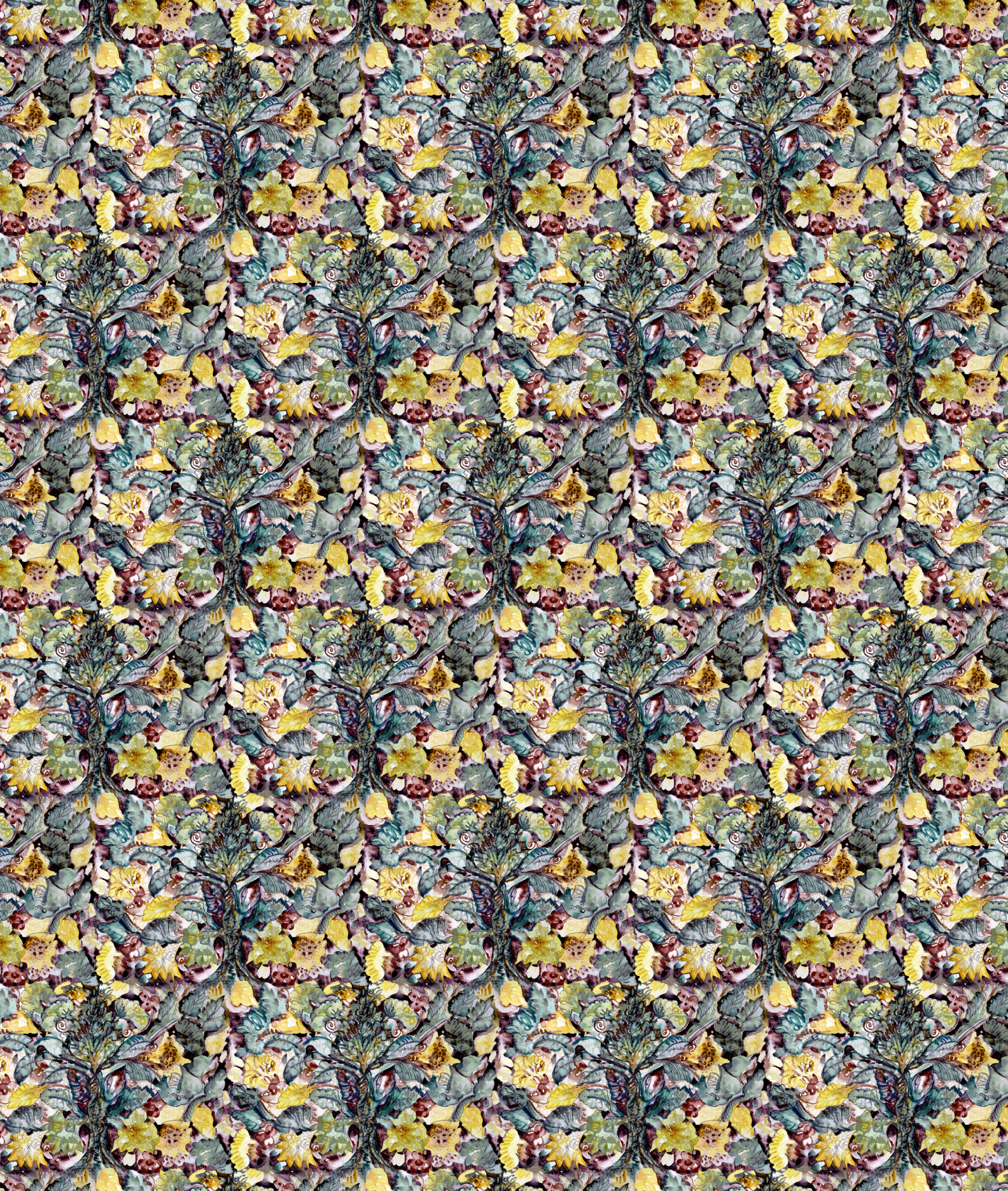 Who is peering out of the floral wilderness? This colorway of “The Watchful Jungle“ print is my entry for this week’s Spoonflower x LainSnow challenge, which was to create a small-scale boho floral in sage, yellow, and coffee. I was initially a little skeptical about the color combination, but enjoyed developing this project and it has really been eye-opening seeing all the lovely things people came up with. 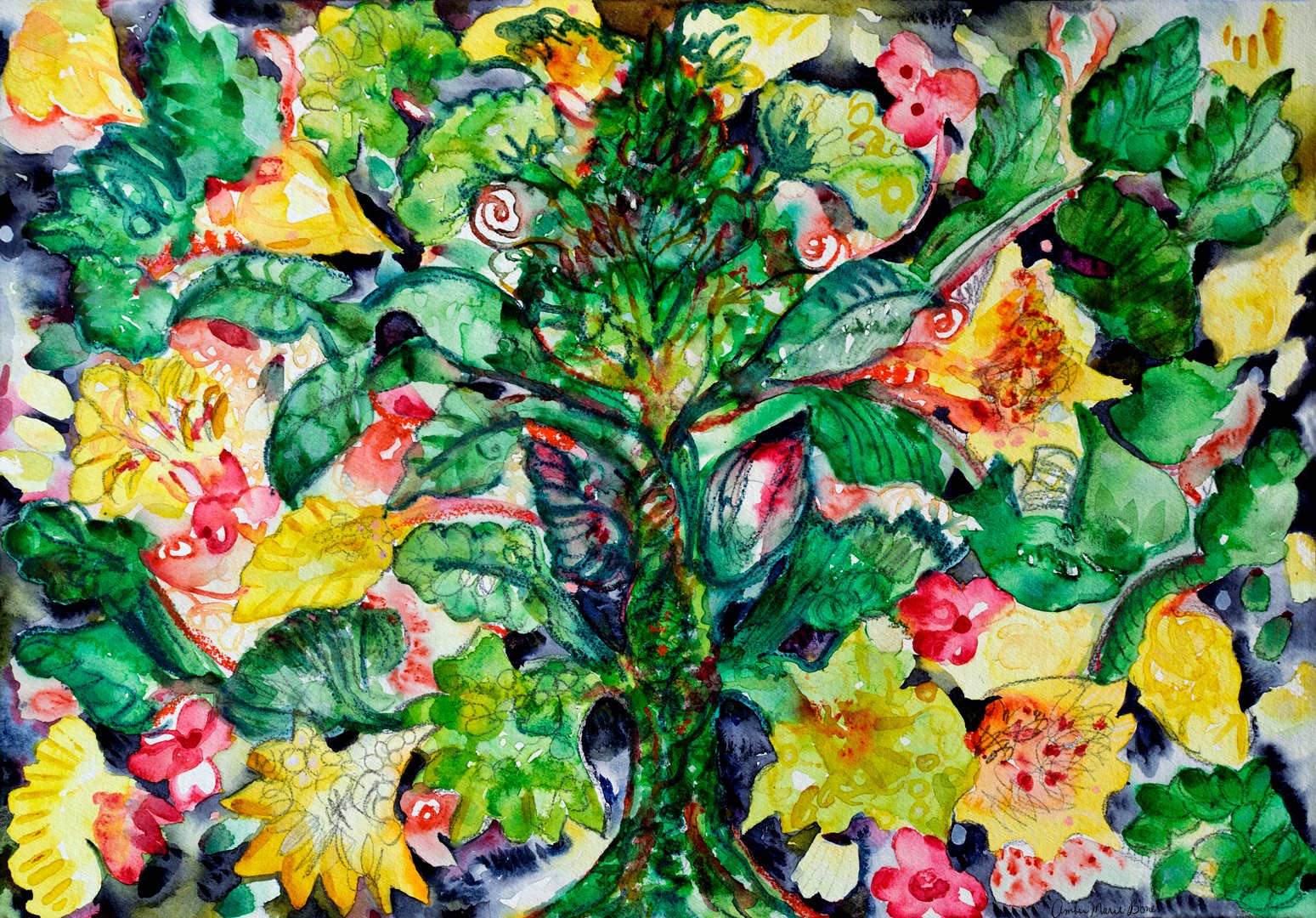 The title of this painting became “The Watchful Jungle” once the eyes mysteriously appeared in the tree (my children gleefully proclaimed that it is clearly Randall from Monsters, Inc 😄, hee hee hee). When I look at it, I think of the wild spirit of the rainforest with the challenge of caring for its inhabitants and resources and honoring and learning about its stories and traditions as the modern world races along. I miss the tropical forests I grew up with in Hawaii very much, so am glad to be able to visit the Masoala Regenwald here in Zürich at the zoo from time to time.
Last Saturday I attended a great Windowsill Workshop with @estemacleod and @mtantau @windowsillchats on called “Fab, Folk, and Floral”. This project is the result (swipe for some of the process photos), with the original in the Colori Combo March Week 4 colors of sunshine yellow, coral, and leaf green.
I have adapted it into a repeating pattern in a couple of sizes, with another colorway in this week’s Spoonflower X LainSnow small-scale boho floral challenge palette of sage, yellows and coffee. 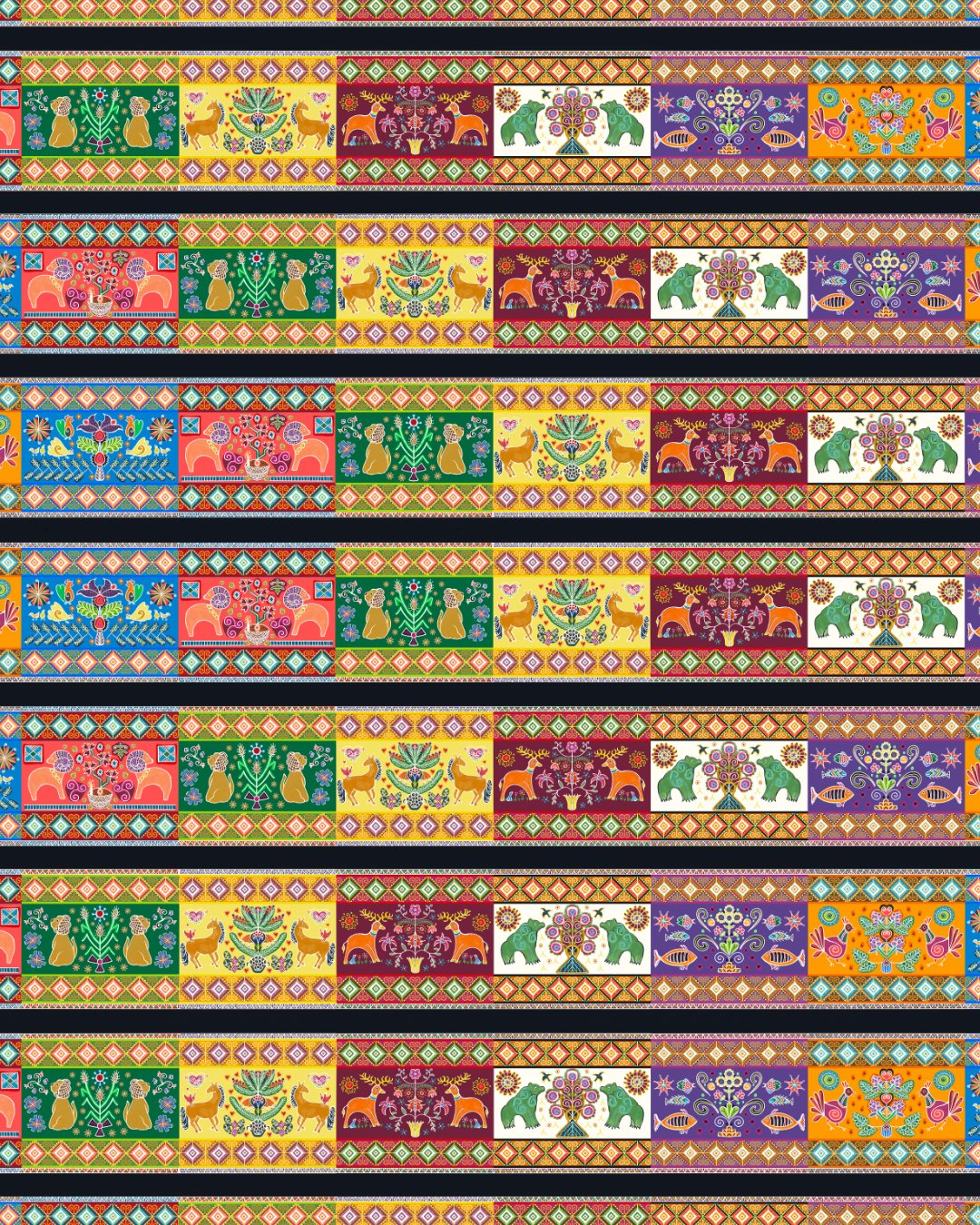 I loved researching Ukrainian folk motifs for this design, which is inspired by embroidery and pysanky and particularly the Tree of Life, symbol of hope and renewal. The colors are from the Petal solids range. We waxed and dyed eggs with patterns like these years ago and this project brought back a lot of memories.
Although these are very much my own imaginings and take, my intention was simply to learn more about the culture and to create this with great admiration and respect for the people of Ukraine. I’m donating any proceeds from this one to support the humanitarian effort underway there (happy to email receipts.) 🇺🇦 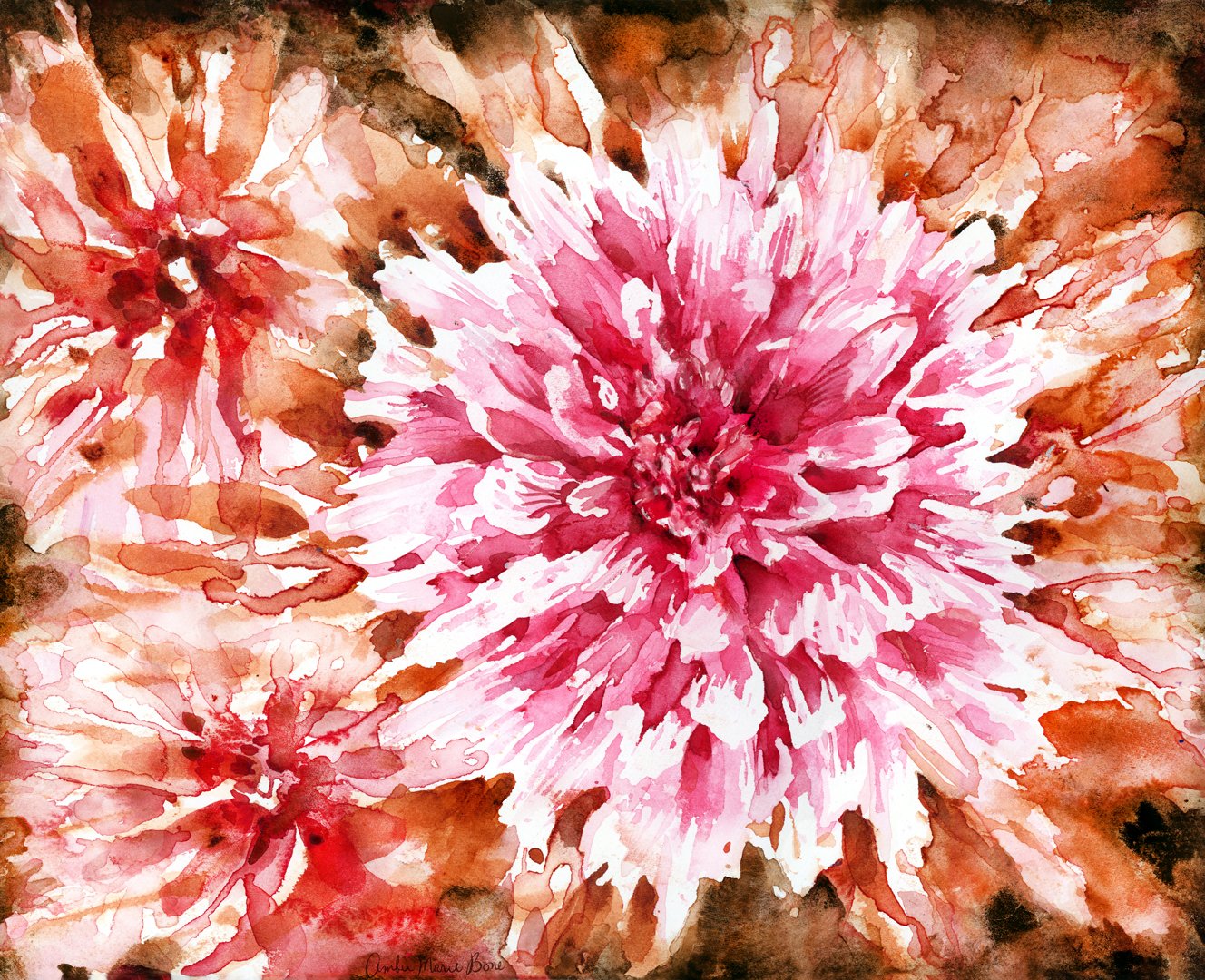 This Rose Pink, Carmine, and Warm Brown Colori Combo watercolor is loosely based on a Jowey Morris dahlia. I always feel like I’m standing in a patch of suspended fireworks around these flowers 😍 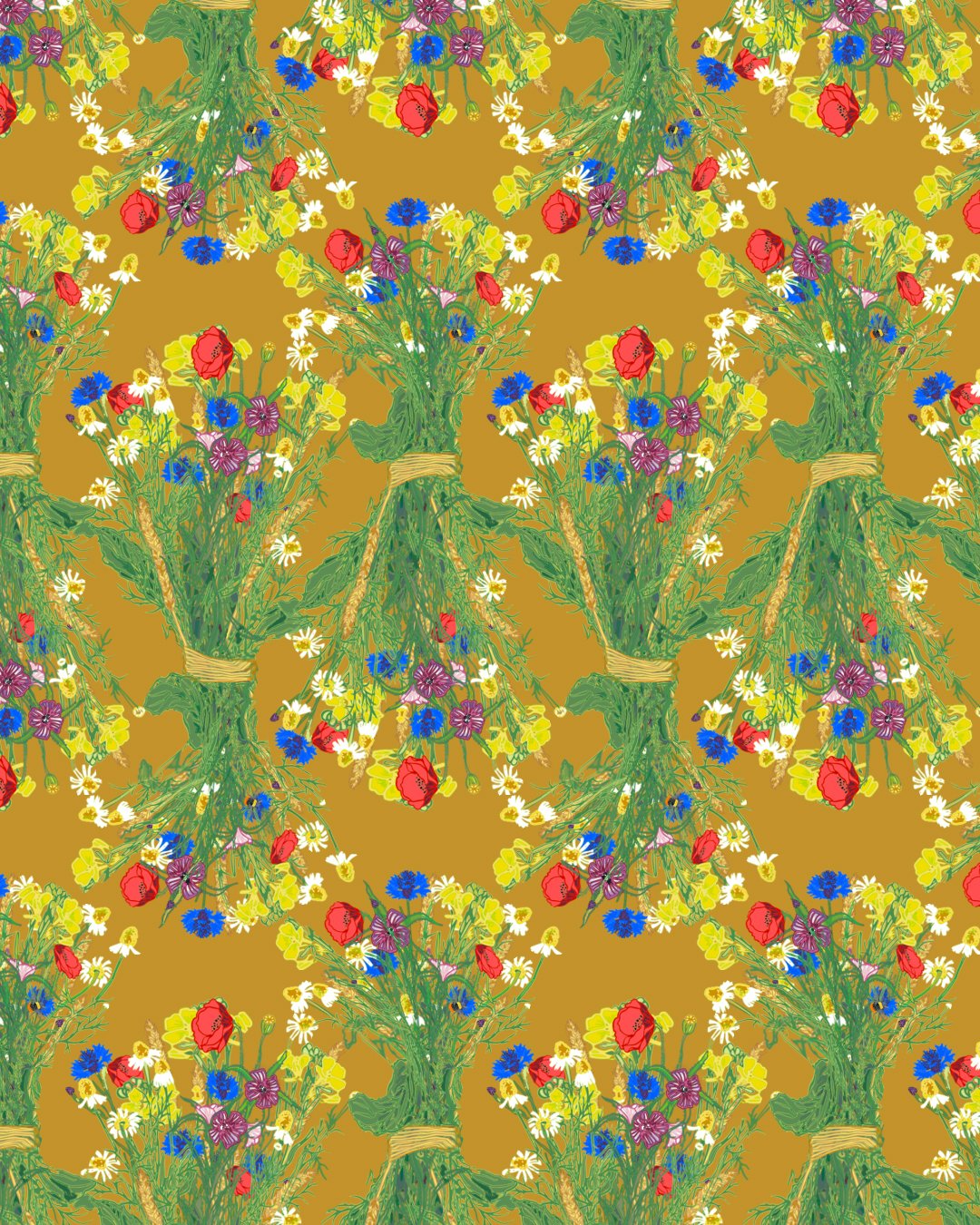 This design was for the In the Weeds challenge last week with Spoonflower and will be available in the next couple of days. These blossoms from the field verge have been gathered for centuries to celebrate the grain harvest and give thanks for their bee-nourishing role. Reminds me very much of all the lockdown rambles across the English and German countrysides in the past couple of years. We learned so much about all the plants and birds, a gift from these strange times.
Featured are poppy, cornflower, field mustard, chamomile, and corn cockle together with wheat. Colors are from the Petal Solid range. Many of these plants have such incredible other names from folklore. I learned a lot about these from the More than Weeds chalking campaign (see https://www.theguardian.com/environment/2020/may/01/not-just-weeds-how-rebel-botanists-are-using-graffiti-to-name-forgotten-flora-aoe) and Dr. Storl’s book „Die Unkräuter in meinem Garten.“ 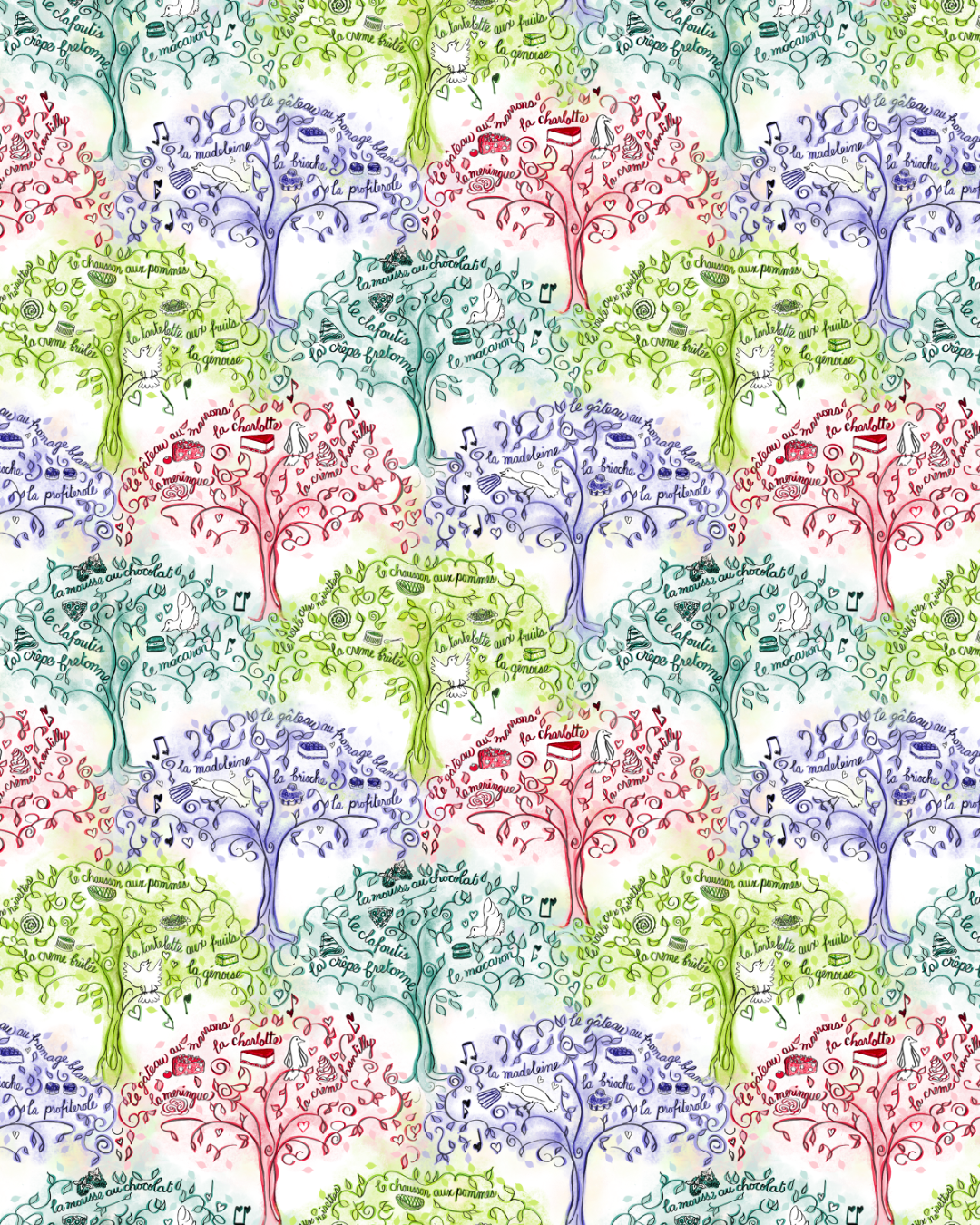 Here is this week’s Spoonflower Challenge entry. The prompt called for using the limited colors of Cotton Candy, Seaglass, and Lilac from the Petal Solids range to create coordinating prints. I also added the Honeydew color as the fourth choice. The palette reminded me of the tempting displays at Ladurée and Conditorei Schober here in Zürich along with the beautiful lithographs of Peynet, so I ended up at dawn in this sweet forest of pastry trees. 😊 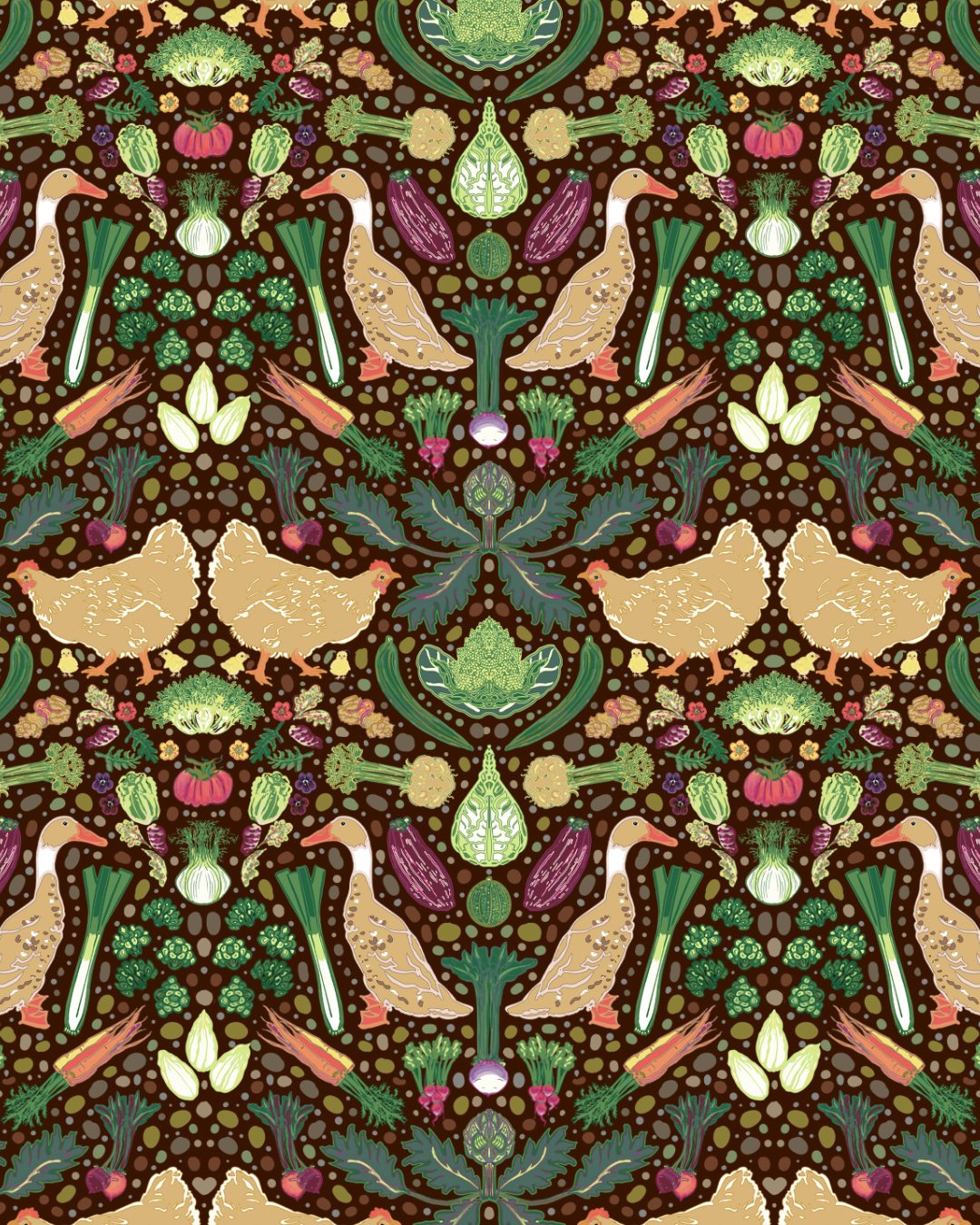 This pattern is a reimagining of iconic botanical designer William Morris’s beloved Strawberry Thief, inspired by the produce markets which have stood on the town square cobbles of Europe for centuries. 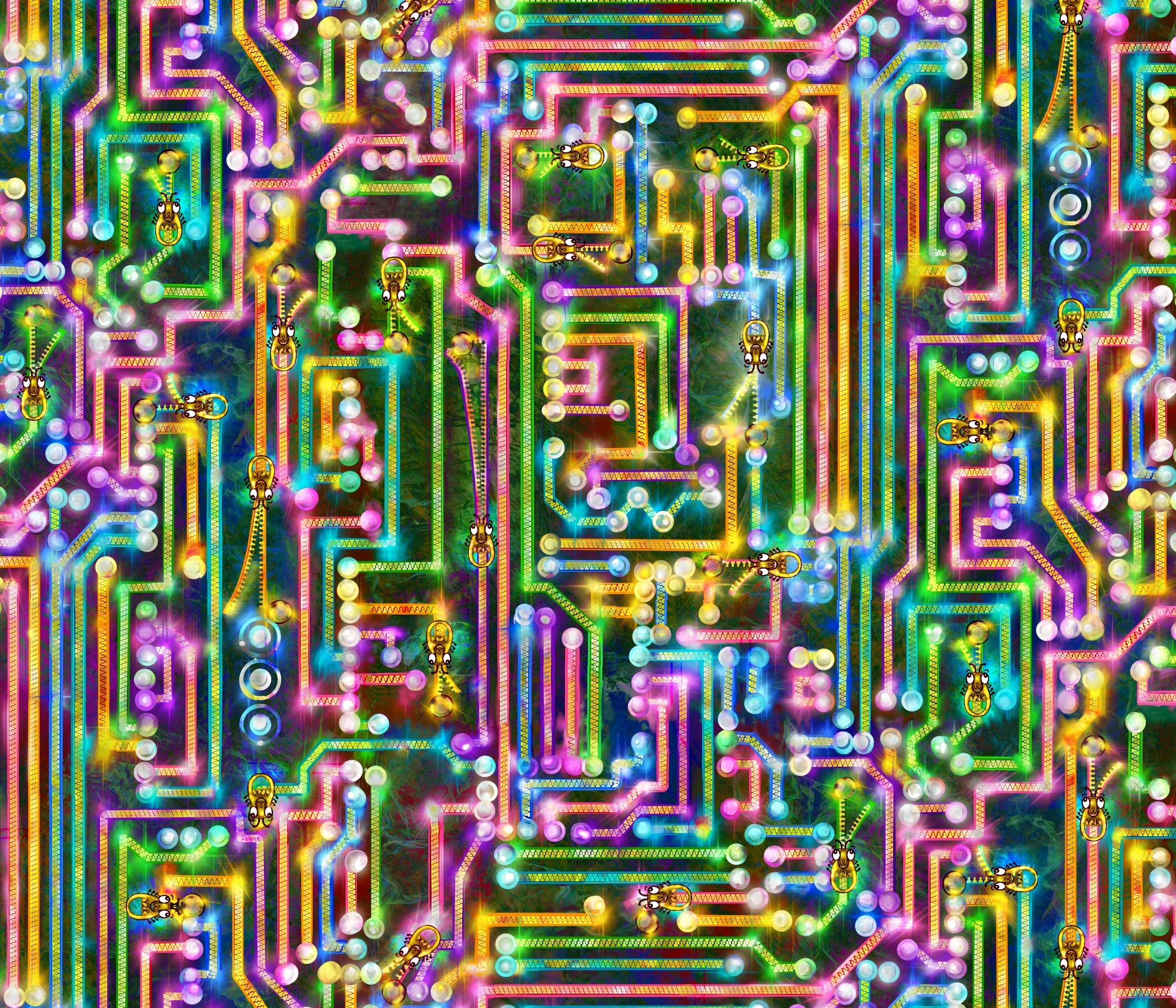 The colors for this pattern are inspired by the fruity iMac colors of 1999 and 2000 (tangerine, strawberry, lime, blueberry, grape and the classic Bondi Blue) as well as video games from the year like Chu Chu Rocket.

As the new century approached, the news was flooded with stories about the effort to keep all the world’s computers from suddenly ceasing to function due to the “Y2K Bug,” which would be unleashed by the necessary change from two-digit to four-digit dates. (Up to that point, the date “74” could only mean “1974” to a computer, since they were inventions of the 20th century themselves and were programmed according with the way people at that time talked about years “I got my first real six string, bought it at the five and dime, I played it ‘til my fingers bled, was the summer of ‘69”…) There was a fear that there could even be more sinister cyberattacks which would exploit the date-related weakness from…who knows where…?

No one was quite sure how the zippers were going to be implicated in the plot to overthrow the existing order, but because something like half of the world’s zippers have a Y and two K letters on them (look at yours and see!), there was a rumor that they MIGHT be all mixed up in it.  The YKK zippers actually come from the excellent Yoshida Kōgyō Kabushikigaisha (YKK Fastenings Corporation) in Japan, and are so omnipresent because they are of such high quality and reliability. Whew!

Where were you at the turn of the century? I was in a crowd at Gasworks Park in Seattle, and remember vividly that after the countdown to midnight, some wag yelled. “we’re still ALIVE!!!!!” and everyone burst into laughter. 🙂 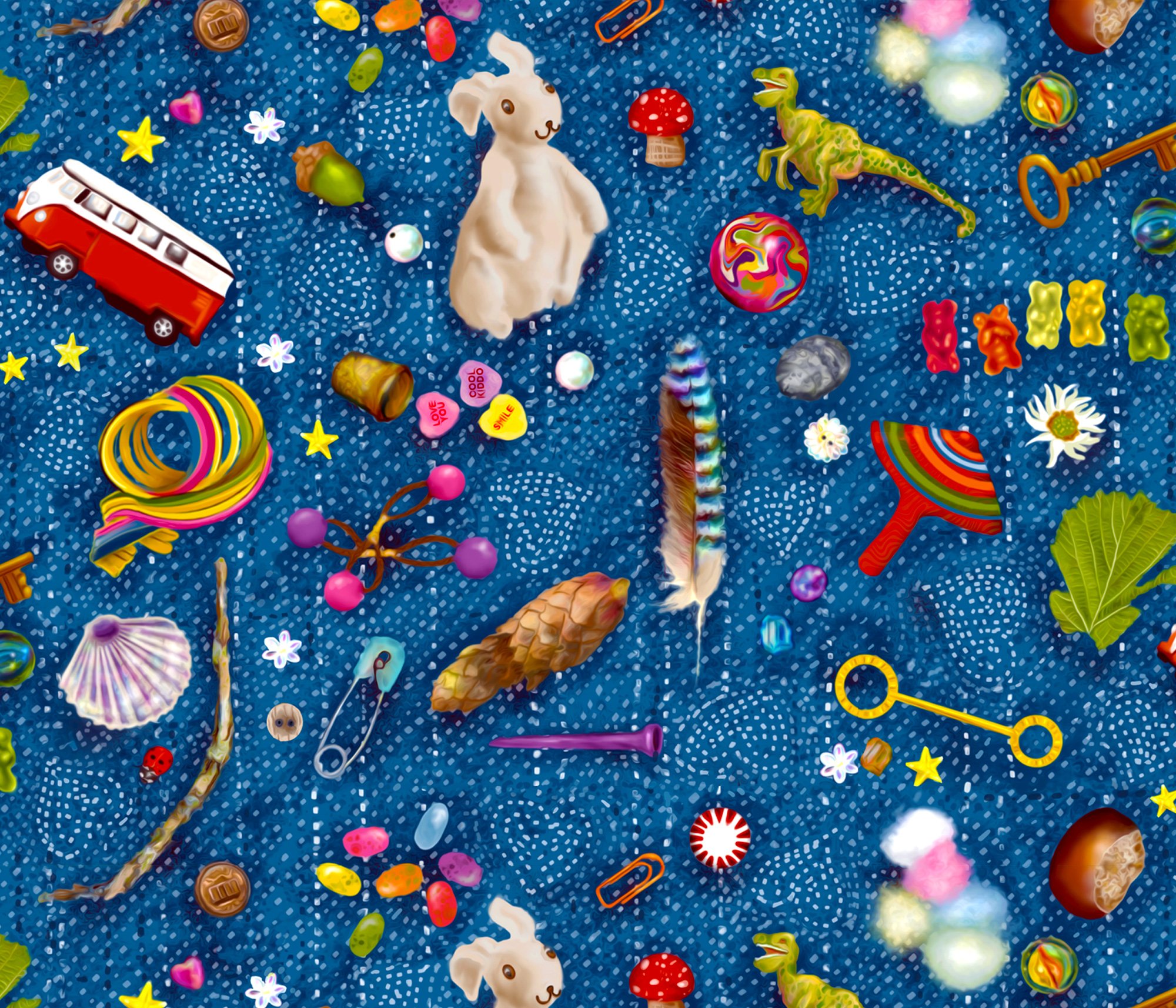 Here’s Pocket Treasures; I was thinking of a child building  pocket world for the favorite stuffed animal friend, one lucky find at a time. I hope you find some of your childhood favorites in this pattern.

As a parent, I must admit that many surfaces in my house look something like this, so it wasn’t hard to come up with ideas! Couldn’t resist making the best friend a bunny; I am glad to still have mine. What did you like to look for and keep in your pockets?